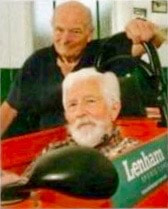 From interviews everything that the owners of the Lenham Motor Company designed was figured out on the fly. They were masters of improvisation, flitting between restoring vintage Bentleys and fielding a fleet of racing cars; engineering a new breed of French sports car and cornering the market in after market hard-tops. In the nineteen sixties and seventies the Lenham Motor Company was nothing if not prolific.

​In a roundabout way it still is. Yet for the firm to exist in the present tense shows that this scattergun approach wasn't without its plus points. It helped it survive at least three recessions, after all.

"I founded the company, as it was in 1962." smiles Julian Kingsford-Booty. "It wasn't something I had really intended doing I wasn't even particularly interested in cars until I met a certain Mr Peter Rix. I was quite happy with bicycles. Anyway; back in the late fifties I was posted at Biggin Hill while I did my National Service with the RAF. I cycled in each day and this MG TC would overtake me; a hand would emerge and wave. One day I was in the NAAFI queue and got a tap on the shoulder. It was Peter. He said that since we both lived in Bexleyheath he may as well give me a lift each morning. we've been friends ever since."

"We were desperately broke at the time," says Rix, who joined the firm in 1970 after a spell as a typewriter salesman and time served with assorted garages. "That old TC died after I tried to salvage a Merlin engine - I think it was from a Lancaster bomber. Its told by a yard owner that if I could get it home I could have it. We craned it into the MG which promptly fell apart. But it's ironic that Julian, who had little prior interest in cars, should go into the business ahead of me."

Though not straightaway, "After I left the services i went to work for a printing machinery maker Hunter Penrose as a technical rep," says Kingsford-Booty. "In the meantime I moved to Kent and managed to rent an old coach house behind the Dog and Bear pub in Lenham Square where I could store and fiddle with my cars; vintage stuff mostly. Then people started asking me if I could look after their cars. I would work on them at weekends but the journey from Lenham to London started getting to me so I took a deep breath and formed The Vintage & Sports Car Garage. Of course all work stopped immediately, but it gradually picked up and we started getting involved in all manner of projects."

"The first thing we did was convert an Austin-Healey Sprite into a fastback, which in time we became well known for. A Mr Curry came to see us with a nearly new car and asked if we could do him a streamlined body. He'd heard of Dr Wunibald Kamm and his Kamm-tail theories and wanted something similar. So with the help of my friend Peter Coleman, who was a demon with Aluminium, we built the first Lenham Sprite."

"Then everyone who owned a Sprite of MG Midget said Coo - can you do one for me? Working with aluminium is rather laborious so we looked at fibreglass as an alternative. I went on a course to get the feel for it and learnt how to make a bucket - which weighed about the same as a mini. When I stop to think about the early stuff I do wonder how we did what we did, but we gradually got the hang of it."

"The Spridget conversion was very successful and we soon started doing other variations which included the open GTO and the pretty Le Mans Coupe. From there we were asked to do detachable hard-tops, which became a core part of the operation although I was a bit reluctant initially. The business just grew and grew until we became the Lenham Motor Company; people kept referring to us as 'those blokes in Lenham', so it made sense to change the name, though it did cause a few problems when we moved down the road to Harrietsham in 1967."

It wasn't long before the competition fraternity cottoned on to the lightweight Lenham Spridgets, one customer was a racer Roger Hurst. "He was keen to get involved," recalls Kingsford-Booty, "He had a friend called Roger Coltham who was looking after Mike Keens Tecno Formula Three car. Around the time we moved to the old bakery in Harrietsham we'd formed a sister business called Lenham Hurst Racing, just to deal with racing cars. With the two Rogers came a slew of foreign drivers, at one point we were running 16 Tecnos. We used to do all internationals and got massively into motorsport."

This led to a spell as a constructor, "We were pretty fired up." continues Kingford-Booty, "We built two types of single seater, one in F3 form, the other a Formula Ford car. We also did some Group 6 sports cars the closed P69 and open P70 variant. We has Ray Calcutt in one of them, a very nice chap who'd driven for Alan Fraser's team in Hillman Imps and Sunbeam Tigers. He did very well in our car and won the 1600xx class of the 1969 STP Championship. The problem with racing, though is the moment you win something everyone wants to know you. Then someone else wins the next week and the phone stops ringing."

"By the time the one litre 'screamer' era of F3 came to an end in 1970 everyone was fully extended financially. We sort of gradually wound down the racing side because we were losing money. But thats the motorsport world. Roger continued on his own, though, and we did work on a Repco-powered Le Mans car and a few other things, but that was effectively the end of my involvement at that level. Also by the time my partner in the main business David Miall-Smith and I were clearly going in opposite directions. In the end he left and Peter joined us and took over the sales side."

"We began to offer what we called 'post-war classics' as part of the business" says Rix. "For example Healeys, MGs and older sports cars. The classic car world didn't really exist back then, so to specialise in these sorts of cars was pretty new. We would sell four to five cars each Saturday, then on Monday morning we'd start looking for new stock for the following weekend."

"We moved to our current premises in Harrietsham, which is the oldest garage in Kent and carried on doing the odd project here and there."

"One of these was the short-lived Darnval LML which arose through our F3 connections" says Kingsford-Booty. "There was a crowd of Frenchman in F3, and one of their number (Vincent Mausset) liked our Group 6 car. He asked if we could make a new body for it - something along the lines of the Ferrari 512. This would have been 1971, The money men behind it were two brothers Frederic and Francios Lechere. They sponsored the construction of a prototype and we set about converting the existing chassis to accommodate a Renault engine. I was supposed to construct the fist car and help them set up for production in Le Havre. It was hopeless, though. If you said "Be here for 7:00am they'd turn up at 10:30 and at midday they'd go off for lunch. The rest of the time they would be standing around, wondering what to do. At about 15:30 I would stop for a cuppa and it would be 'ooh, you English -all you ever think about is tea!'' I built the first car wished them all well and left." Just six Darnvals were completed before the project tanked in 1972.

More successful, if less exotic was the Spridget based Arkley. "That was conceived by John Britten, who raced a special ModSports Lenham SS1800 very successfully." says Kingsford-Booty. "He ran a Morgan agency and had a bee in his bonnet about turning a Midget or Sprite into a sort of scaled-down Morgan and then selling kits. We did a mock-up while he made suggestions about changes and it just sort of emerged. I wasn't particularly taken with the styling at the time."

"When the Arkley came out in 1970 everyone said it looked like Noddy's car." Rix interjects. "The funny thing is, it was incredibly popular - we made them by the hundreds."

"A bit later in the seventies came the Lenham-Healey, a more traditionally-styled sports car. That started with a guy in London who asked us to make him a pre-war Alfa Romeo replica based on a Triumph TR6 chassis. it would have looked horrible, but it didn't come to anything anyway. What it did was set Julian thinking, which ended up with me buying a ratty old Healey 100/6 for £35.00 that we took apart and fitted our own body. We did this simply for our amusement."

"We took it to the Brighton Speed Trials where a chap from Motor Magazine saw it. He was very keen, wrote an article on it and then people wanted them. We went around the country finding donor cars that were good mechanically but with bad bodywork. We caught a bit of flak because people thought we were cutting up nice cars - but they weren't. We'd buy a car for maybe £120.00, take it to bits restore the chassis, rebuild the engine, do our own body, trim it, and we had a Lenham Healey. We did 19 all told."

Other projects followed, not least a run of MGB 2+2 roadsters, before the car building side was gradually set a side, if not necessarily for good. Lenham Sports Cars, as it is now called, was sold to enthusiast Andrew Actman in 2005 and specialises in historic rally car preparation. "It's interesting how there have been so many different phases of the company." says Kingsford-Booty, who stayed on part time until 2009. "Not all of them planned either."

Rix has carried on under the new regime. "I'm regularly told that the only way I'm ever leaving here is in a box," he says, his smile a giveaway that almost 50 years into the Lenham narrative we've only just seen the start of the third act.